ABSTRACT
David Buckel set himself on fire to publicly stage the horrors of climate change, Delores “Lolita” Lebrón performed a sensational act in the US congress hall, hailing bullets while calling out: ¡Viva Puerto Rico Libre!

When do we recognize violence as violence? When is the absence of a counter-attack a form of compliance? Do the desires of activists need an expression of violence to establish an ‘otherwise’ that’s carefully repressed? In “Blow your mind! Shards hailing, on superfluous violence to stop surviving” various instances of violence weave together, obscuring the difference between theatre, terrorism, assault and sensational act.

The end of the world is a future for those who have been living like survivors. To explore the potential of violence as resistance, the author proposes to fight as an armless aimless army of vulnerables.

‘Violence happens upon you. But that’s not really true for everyone. As a white cis-woman with passport privilege, I can say I’m interested in violence. Interested in, interested in. Violence doesn’t surround me. It may happen to me, but I would perceive it as an extraordinary event, a happening. I approach violence. I approach, I approach – there’s enough comfortable distance to repeat my sentence and imagine it echoing.’ 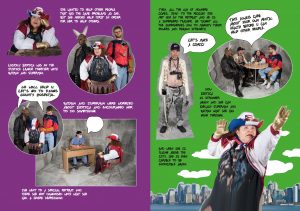